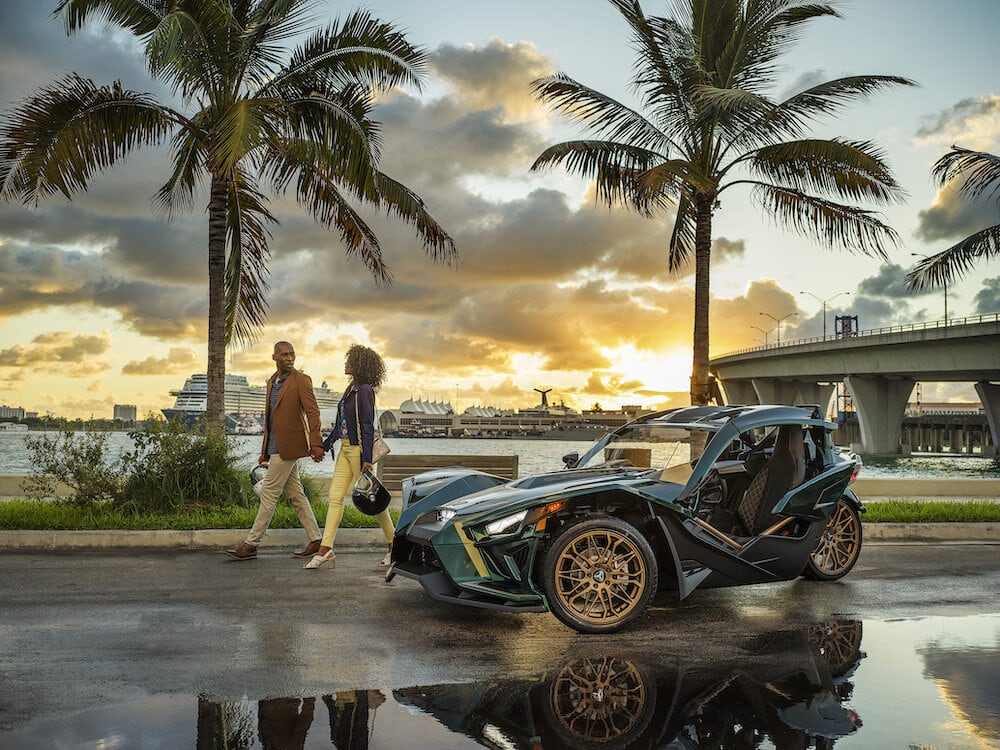 Turning Heads
The Polaris Slingshot made news in 2018 when the three-wheeled roadster was reclassified as an “autocycle,” making it legal for any person with a valid driver’s license to drive one in Florida. Now, the brand is making headlines with its newest model, the Grand Touring LE, which features a new AutoDrive automatic transmission, allowing drivers to operate without clutching or shifting. Fewer than 300 of these Fairway Green vehicles—complete with bronze accents and special-edition bronze wheels—are being made, so be sure to secure yours today. $33,999; slingshot.polaris.com

The Speed of Sound
Klipsch, which produces some of the best in-home theater systems in the industry, recently partnered with the McLaren Formula 1 racing team to create the exclusive T5 II True Wireless Sport McLaren Edition Earphones. The black and papaya-orange wireless earbuds feature a moisture-removal system to withstand sweat and other elements, as well as an eight-hour battery. The sleek, waterproof carbon-fiber carrying case alone is worth the price of admission. $249; klipsch.com

Watch Me Now
Known for its partnerships with the biggest names in sports and entertainment, Roger Dubuis once again wows with its new Lamborghini Squadra Corse collection inspired by the Aventador and Huracán supercars. The handcrafted timepieces are made from materials found in the cars, such as titanium, carbon fiber and Alcantara. A rubber strap made by tire supplier Pirelli adds the finishing touch to every model of this exhilarating lineup. Price upon request; rogerdubuis.com

Porsche Repurposing
Porsche aficionados know that today’s highly complex cars were established during much simpler times. PRZ Archives aims to elevate that golden era of air-cooled cars with a series of carefully thought-out but wildly simplistic pieces of upcycled automotive components, such as 911 wheels, side mirrors, spoilers and headlights—must-haves for art and design connoisseurs. Tribute Wheel, $911; przarchives.com

Premier Primero
The return of the Land Rover Defender is a big deal for globetrotters who prefer roof-mounted tents in the Serengeti to chic NYC penthouses. Regardless of its place on the map, the Zenith Defy El Primero 21 Land Rover will relentlessly keep up courtesy of a 50-hour power reserve and 100-meter water resistance. The caseback showcases the revolutionary El Primero 21 movement, which is seen through a clever Defender wheel design. Limited to 250 pieces. $13,600; zenith-watches.com

Breaking Barriers
Jacob & Co. is celebrating Bugatti breaking the 300-mph barrier with its epic masterpiece: the Twin Turbo Furious 300+. Much like the Chiron Super Sport 300+ itself, the 88-piece case is made from carbon and black titanium with every moving component following function over form. A total of 832 parts tick inside the half-million-dollar timepiece, which is limited to only three examples worldwide. $580,000; jacobandco.com

Surf’s Up
The days of waiting for that perfect wave are over thanks to Radinn electric jetboards, which will help you chart your way through the water with agility and speed. Even better, their long-range battery packs don’t need gasoline and therefore don’t produce any fumes harmful to the environment. There are three main boards from which to choose—Carve, Freeride and Explore—and all can be customized to suit your own style and boarding needs. Starting at $6,550; radinn.com