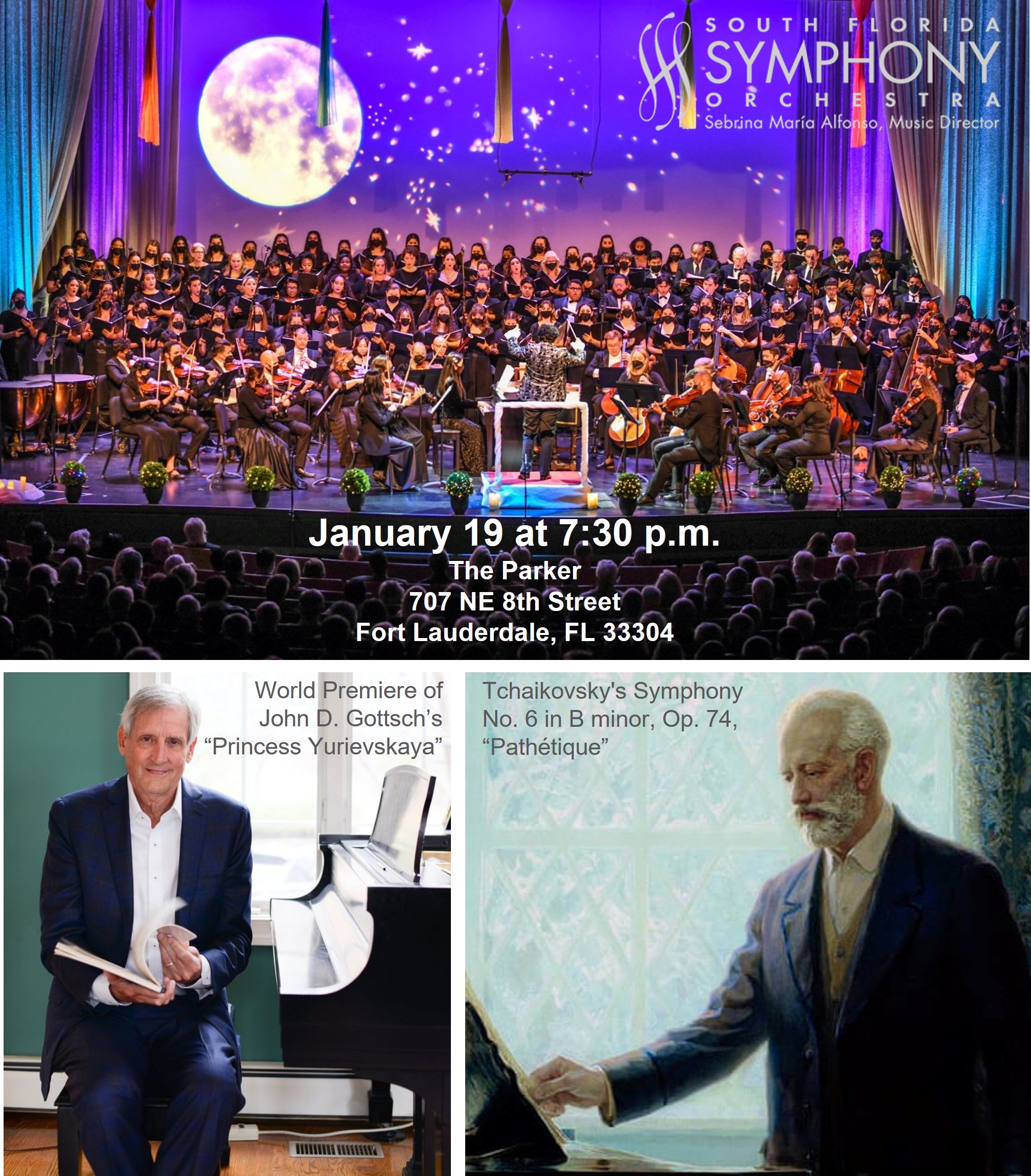 South Florida Symphony Orchestra (SFSO) rings in 2022 with the old and the new! The esteemed orchestra, conducted by Sebrina María Alfonso, will perform the world premiere of local composer John D. Gottsch’s Princess Yurievskaya followed by Tchaikovsky’s Pathétique as part of its Masterworks III series. The concert will commence on January 19, at 7:30 p.m., at The Parker in Fort Lauderdale.

The concert will begin with the world premiere live performance of Princess Yurievskaya by SFSO composer-in-residence, John D. Gottsch. Princess Yurievskaya charts the passionate love of Catherine Dolgorukova and Tsar Alexander II — from their first meeting and eventual marriage to his assassination. This vivid narrative is full of exciting dances and torrid romance, irradiated with evocative orchestral solos.

John D. Gottsch was born in New Orleans, Louisiana and moved to Florida with his family, shortly thereafter. He spent his youth in the lake country of the Sunshine State traveling extensively and observing natural habitats. These explorations of Florida gave him an enduring love for its beauty and wildlife. He has been a lifelong composer and a number of his compositions reflect his deep appreciation of the outdoors. SFSO also performed Gottsch’s Bagatelles for Violin & Piano as part of its Summer With the Symphony Series in June 2021. His piano suite, Homosassa, premiered in Palm Beach in 2020. His piano quintet, Maryland Hunt, premiered at the Embassy of the Kingdom of the Netherlands in Washington, D.C in 2018 and has been performed in Philadelphia, Vienna, Rotterdam and Baltimore. Gottsch, a full-time doctor, now splits his time between Baltimore and Key West.

Tickets for Masterworks III: Tchaikovsky & Gottsch start at $15 for the January 19 concert at The Parker (707 NE 8th St, Fort Lauderdale). Tickets are on sale, now at southfloridasymphony.org/masterworksiii. Additional health and safety concert attendance protocols can be found on the site. Student tickets and group rates are also available by calling (954) 522-8445 or emailing info@southfloridasymphony.org.