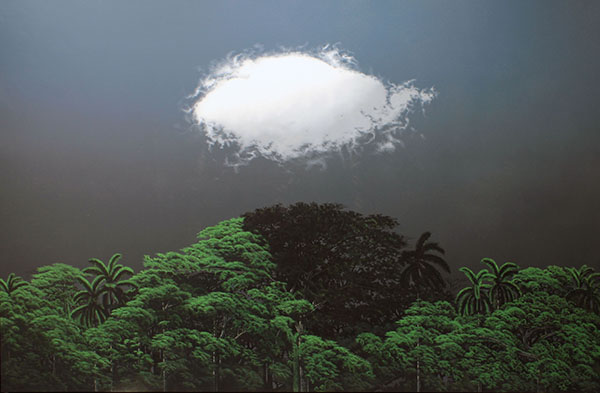 An exhibition of paintings by Cuban artist Maikel Martinez.

While at first glance Martinez’s works appear to be photographs or photorealistic paintings, upon closer inspection they are revealed to be places that don’t exist. The majority of them are dreams or images that come to Martinez’s mind. He takes elements from landscapes and develops them to create his own scenarios. As he paints, he plans where to place each element while at the same time transferring the emotions he is feeling in the moment to the canvas. For example, through the painting “Blanco Infinitum” he expresses the feeling of meditation or levitation—being transported from one place to another.

While his paintings are his method of expressing himself to the world, Martinez prefers to paint in solitude. Through the process of painting he achieves a sense of calm. This solitude is reflected in his paintings: landscapes (or rather, “dreamscapes”) reduced to their minimal elements.

Martinez, born in Pinar del Rio, Cuba, received the Landscape Award at the 2000 Salon Nacional, sponsored by the National Union of Writers and Artists of Cuba (UNEAC) and held in homage to Tiburcio Lorenzo, the Cuban painter recognized as the Cuban “Lord of the Landscape.” His work has been exhibited in institutions and galleries in Europe, North and South America and the Caribbean including the Royal Bank of Canada and the Museo Provincial de Historia in Pinar del Rio, Cuba.