An event every week that begins at 12:00 am on Sunday, Thursday, Friday and Saturday, repeating until July 10, 2022 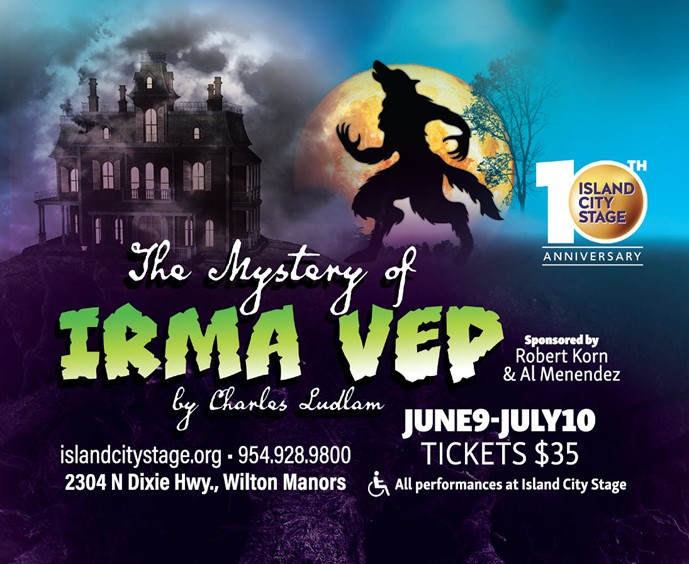 Vampire attacks, werewolf sightings, and the resurrection of an Egyptian Princess all make an appearance in Island City Stage’s newest production of “The Mystery of Irma Vep: A Penny Dreadful” by Charles Ludlam, running June 9 – July 10. This hilarious send-up of gothic romance and horror films, in which two actors and lightning-fast costume changes are the stars of the show, is part of the award-winning theater company’s 10th Anniversary 2021-22 South Florida Season.

Directed by Andy Rogow, this entertaining production is focused on an English estate haunted by the former mistress who has recently passed (or has she?). Add-in mummies, secret identities and a ton of madcap blunders all under the escapist guise of a gothic penny dreadful – grim short stories made popular in the mid-1800s and turned out en masse. The twist, here, is the high humor, 35 costume quick-changes and dozens of wigs that bring an eclectic cast of characters to life in this camp classic from Charles Ludlam (1943-1987), creator of New York’s Ridiculous Theatrical Company. “The Mystery of Irma Vep: A Penny Dreadful” originally premiered in October 1984 at the Sheridan Square Playhouse in New York City where it played for two years, and it remains Ludlam’s most popular play.

Bruce Linser is a South Florida actor and director who last appeared at Island City Stage as Philip in “The Pride.” Other favorite roles include Artie in “The House of Blue Leaves” (Palm Beach Dramaworks), Man in Chair in “The Drowsy Chaperone” (The Wick Theatre), and Cliff in “Cabaret” (Maltz Jupiter Theatre). Favorite directing projects include “Man of La Mancha” and “Avenue Q” (MNM Theatre Company), and Woody Guthrie’s “American Song and The Spitfire Grill” (Palm Beach Dramaworks). He is also the manager of the Dramaworkshop in charge of new play development at Palm Beach Dramaworks. Linser is a member of Actors’ Equity Association and an associate member of the Stage Directors and Choreographers Society.

As they say in Poltergeist, “He’s baaack!” Proudly holding the distinction of “local actor who has appeared in the most Island City Stage productions,” Larry Buzzeo is ecstatic to reprise the role (or roles) for which he won the coveted Loafy award (a loaf of Cuban Bread) in Tampa, Florida, a decade ago. Though a Stamford, Connecticut native, Buzzeo’s professional theater life took root in the Sunshine State and Island City Stage is one of his favorite haunts. Fancying himself a character actor, Buzzeo is grateful for the opportunity to bring some truly colorful characters to life in Island City Stage productions including “Pig Tale,” “Hir,” “Grey Gardens,” “POZ,” “Daniel’s Husband” and almost every “Shorts Gone Wild.” His comedy-horror credits also include Dr. Frank-n-Furter in “The Rocky Horror Picture Show” (Slow Burn Theatre) and Dr. Frederick Frankenstein in “Young Frankenstein” (Pembroke Pines Theatre of Performing Arts).

“The Mystery of Irma Vep: A Penny Dreadful” is sponsored by Robert Korn and Al Menendez with support from Our Fund, the SHS Foundation, the Broward County Cultural Council and Florida Department of State Division of Arts & Culture.

Island City Stage is located at 2304 N. Dixie Highway in Wilton Manors. Show tickets are $35 each and are available at islandcitystage.org/the-mystery-of-irma-vep.