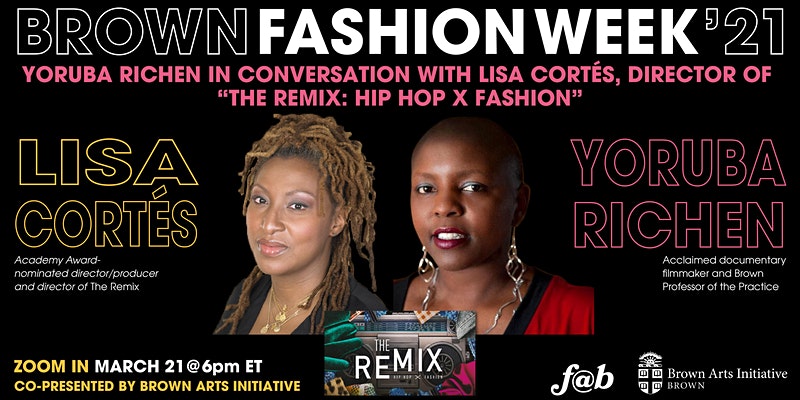 Join Fashion@Brown and the Brown Arts Initiative for a discussion with LisaCortés, the Academy Award-Nominated director, writer, and producer of the film, in conversation with award-winning filmmaker Yoruba Richen, Brown Professor of the Practice.

The Remix is a story of hip hop’s influence on the fashion industry, which has led to the stratospheric and global rise of street wear. It is a story of African American creativity and limitless possibilities of this shift in culture, focusing on the journeys of fashion architect Misa Hylton, streetwear designer April Walker, as well as Dapper Dan and Kerby Jean-Raymond.

These shifts, which started with hip hop music in the late 80s and 90s, have become increasingly clear in fashion over the last 19 years as luxury designers have competed to incorporate hip hop into their runway shows from “It” sneakers to designer hoodies. The film also focuses on women’s contributions to hip hop culture. Says Cortés: “I think for a long time, because I am a woman in hip-hop in my outlook, I’ve been very committed that the history was restorative to the rightful place of women in the culture.”